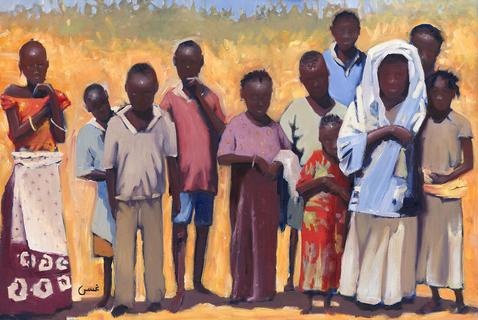 Children of Steel
Oil on canvas
24x36
< previous next >

It was early afternoon when we landed on the dirt strip. It was to be a meeting with district officials and the elders of a small village on the Swahili Coast. As we taxied to a stop, the two of us surveyed our surroundings to get a sense for what sort of welcome we might expect. I picked out a man in uniform standing alongside what appeared to be village elders. Our earlier coordination and perhaps our intentions seemed to have paid off though our larger objectives remained in doubt. Then I noticed a small group of children standing on the edge of the clearing. Their dark eager faces beamed a mosaic of curiosity and shyness, excitement and wonder, and some underlying thread of adolescent defiance. I snapped a quick photo and as I lowered my small camera, I realized for the first time, where true promise in this effort would be found and where the best human outcomes in this new war would be sown.